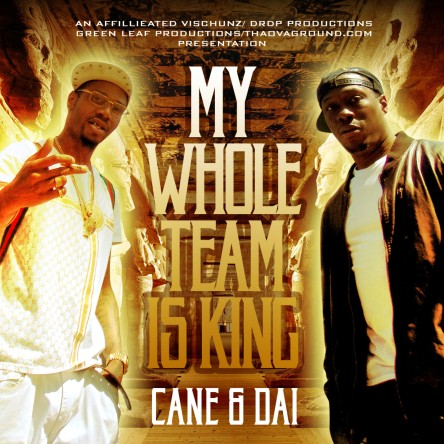 Memphis duo High Ruler Warlord King Cane & Pharoh Mista Blac Prince L’Daialogue DiCaprio are known as the group 2Deep and has been for years. But on their latest project titled, My Whole Team Is King they are taking it back to the basics.

“Our very first mixtape was titled Lil’ Cane & Lil’ Die (-ai) way back in the days” says L’Daialogue. “By stating that its still Cane & Dai isn’t saying that we ain’t still 2Deep. Cane & Dai is the essence & beginning of 2Deep.”

“We are speaking to our core from the neighborhood that we know” added King Cane. “If your whole team ain’t shinin’ the same way you are, something is really wrong with the so-called king or queen leading that clique.”

With standout tracks like the syrupy-light piano-synth laden “OK”, the smooth Marvin Gaye-influenced “Fool From Tha Start” or the street-political 808 kickin’ “US”, Cane & Dai is definitely taking it back to the North Memphis, Tennessee streets that they were born and bred on.

This project is produced entirely by MiUnderstatistic & L’Daialogue DiCaprio and has one lone feature, D-Rock.

The project will be available on all streaming sites and for purchase on August 4. Cop below NOW!!!

P.S For all of the DJs…a CLEAN VERSION of Low Key is included as a BONUS TRACK on the project!!!!